This is a simple diagram to illustrate the use and the difference of a Distributed Version/Revision Controlling System (DVCS) opposed to a traditional/centralized VCS. The post will target a generic audience and will not include in detail technical information. It will rather be an introduction to the DVCS in general. As you already know that Git is my favorite VCS software and the diagram will also have some reference in that sence.

My purpose of drawing the initial diagram was to explain DVCS (namely Git) to a client. However I wanted to change a few things and here is the results. I didn't think that this is that important to create a new version. But I wasnted to try out OpenOffice.org Draw as a diagramming tool. The older version was done in Dia. After trying OO.o Draw, I think I'm going to stick with it for most of my diagramming needs. :) Still Dia is another great tool to use. So here is the documet which came out from my OO.o Draw experiement.

If you are interested in learning more about DVCS here is a few links to get started.


Without further delay here is the diagram. You may want to download the (PDF/PNG) file for better viewing. 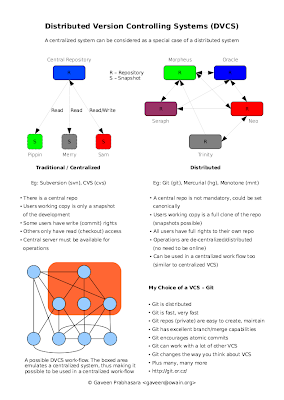 I'm busy these days everybody. Lot of Rails applications to be deployed on Linux hosts with Thin and also Passenger. :) I know, I know I'm delaying the Ruby hosting post again.

Anyway, I don't have much time right now for a full post. Meanwhile enjoy this diagram about Distributed version controlling systems, especially Git. This is intended as an answer to the people who are new to the Distributes VCS and try to understand why everyone is leaving Subversion to jump into the Git bandwagon. :) If you need a wee bit more info about Git, from me, have a look in my old blog post here.

So here it is. Enjoy it while I get back. And.. oh, you might want to view the image in actual size to read it's content. :)

Update: Ok, this is the second time Scott Chacon beat me to do something and did it way better than I could've done. What to fret? The guy's awesome. :) If you want to have a better view of how Git works I'll beg you to watch Scotts Git video or at least Randal Schwartz's speach at Google tech Talks.

July 23, 2007
I know some of you are asking why , rather than how , regarding migration from Mozilla Thunderbird to Evolution. Maybe that's why there are lot of Evolution to Thunderbird migration guides, but not many vice-versa. Fear not, here is a guide, to assist who dare to migrate from Thunderbird to Evolution. The techniques described here are tested with the newer versions of both the software, namely Thunderbird 2.0.0.4 and Evolution 2.10.2. On higher versions also this should work without an issue. I think Mozilla people are doing a wonderful job with both Firefox and Thunderbird . From my point of view Firefox is the best general purpose web browser around. It beats most proprietary browser in speed, stability, security, modularity, etc. (and don't start commenting the so and so browsers are greater or so and so is cool too. I know they may be, Fx is simply my choice. This also applies to any comparisons with Evolution too :) However Fxs' counterpart in e mail business, is not
22 comments
Read more

August 26, 2008
Setting up a Subversion (svn) repository is something development teams have to do fairly regularly, not that I want to use Subversion. :) If you listen to me, go use Git . Subversion is undoubtedly very good. But after using Git for about a year, you can't simply get me to switch back. Git is that good. :) I've written about Git before . In cases where you can't use Git (or you feel too castrated by TortoiseSVN, pardon me for the pun) you can use Subversion. In this post I'll go through the steps you have to follow to get a basic Subversion setup up and running on a CentOS 5 Linux host. However I think you should be able to use this on other Linux distros too. There's more than one way to host a Subversion repo. I'm going to stick with one way involving WebDAV. Don't mind the buzz word. It's the most common usage for this purpose. If you want a repository where you want to checkout and commit remotely, this is an easy way of getting it done. In additi
6 comments
Read more